Challenge: Conventional peptide analysis techniques do not lend themselves to a fast, cost effective process analytical workflow. The several chromatography methods, and combinations thereof used generally require derivitisation (adding a chemical to make the analyte more visible). These techniques also require expansive columns and costly reagents. Liquid chromatography also has fairly low resolutions and can be slow to generate repeatable data. At the other end of the analytical spectrum are the mass spectrometers. While 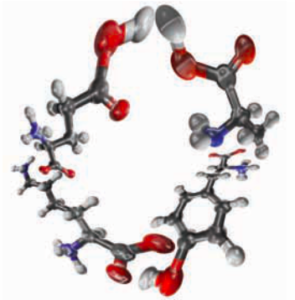 being the gold standard in analytics so far as sizing and composition of analytes are concerned, most mass spectrometers are in high demand and usually have a queue (two weeks or more is not unknown). This does not lend itself to a continuous and timeing rigorous workflow. What is needed is cheap, on demand analytics of a high quality and cost effective nature.
Rationale: Quality control of peptide and all biotherapeutics are a vital and complicated issue. In the case of peptides, however, this is exacerbated by the analyte’s size.

Peptides are generally defined as being less than 50 amino acids long (Molecular weight <5.5kDa). This range is not ideal for many analytical techniques and so makes
routine, economical analysis of them difficult. Glatiramer acetate is particularly difficult to analyse being comprised of random polymers of four amino acids (MW~6.4kDa). While some formulations are created synthetically, this study was on peptides generated by the Tryptic digest of a larger peptide (Figure 1). Identifying equal presence of each peptide may be important as the exact mechanism of the drugs action has not been elucidated, except that they appear to mimic the basic myelin protein and therefore act as decoys to the autoimmune system. While of similar sizes, the separation of the variants can be achieved by charge based capillary zone electrophoresis (CZE).

deltaDOT Solution: Rapid analysis of Trypsin digest of Glatiramer Acetate by label free capillary zone electrophoresis on the deltaDOT HPCE-512. This technique separates the molecules by their intrinsic charge and allows cost effective and repeatable analysis 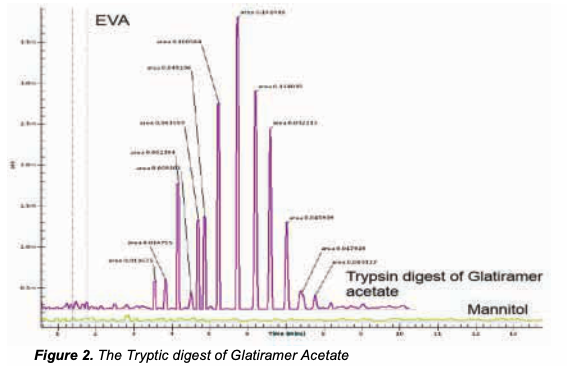 in under 9 minutes of separation time as shown in Figure 2. This shows Glatiramer Acetate post –Tryptic digest and clearly reveals the complexity of the formulation. As the exact mechanism of the drug is not yet known there is a clear requirement for a consistent formulation. It stands to reason that a complex formulation like this will be prone to multiple variations that can creep in at any stage of the bioprocess, whether the molecule is generated synthetically by chemical chain additions or by a digest of a larger molecule. Repeatability in CE has long been an issue, but the Multipixel HPCE-512 has solved these issues so now it can be considered a viable tool for this analytical process.


Figure 3 shows the repeatability of the formulation’s analysis. The scaling has reduced some of the peak sizes but the repeatabilities are very good, (peak time being an indicator of charge and peak area the concentration of each peptide chain). Once the production 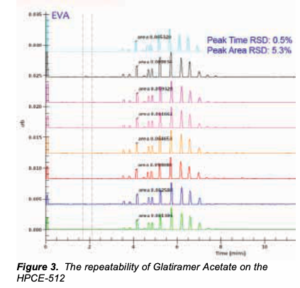 process has been optimised, frequent analyses at different unit processes will be directly comparable. The use of standard statistical packages (as outlined in deltaDOT’s protein fingerprinting Techniques article) will enable hard metrics to be applied to this process. The repeatability demonstrated here will allow a high measure of confidence in the technology and its application to complex peptide analysis.